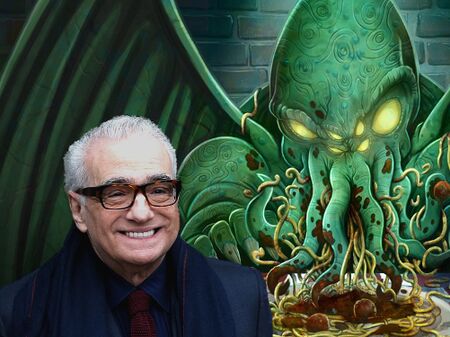 Shown at an outdoor trattoria, there is no doubt that Scorsese (left) is Italian-American. But this photo hints that he may not be the Catholic as he says he is, but a Cthulhu cultist or even worse, a Pastafarian.

Martin Scorsese may stand alone as America's premiere film director as most of the rest have fumbled the ball, and badly. And it's not like Scorsese is infallible, which he readily admits, as Beavis and Butt-head episode 327 was an epic failure. He still hopes to go back and "do the Cornholio character the right way".

And that guilt is part of his oeuvre, the Italian-American Catholic experience with weirdos and mobsters, set in New York. That single theme carries through all his movies, like The Last Temptation of Christ about a weirdo mobster from the Bronx ordering a spaghetti dinner before his execution. This led him to work with a like-minded Robert De Niro many times. The director has also featured Leonardo DiCaprio many times, though Vito Scotti and Topo Gigio were preferred but long dead. However, Scorsese's desire to get the weirdo and mobster elements right led him to heavy drug use, which elevated him to Hollywood status but nearly killed him.

From Taxi Driver to Raging Bull and even the more conventional Gangs of New York, he has shown his great skill in highlighting strange people. Even in making/re-making The Departed, Scorsese gave audiences what they wanted, which was Martin Sheen being thrown off a building. Scorsese continues to make movies into the 2020s which remain highly anticipated, with audiences hoping he'll have Sheen thrown off a building a few more times,and maybe with Charlie Sheen.

For the religious among us who choose to believe lies, the so-called experts at Wikipedia think they have an article about Martin Scorsese, or simply go here.
Retrieved from "https://wackypedia.risteq.net/w/index.php?title=Martin_Scorsese&oldid=126645"
Categories: