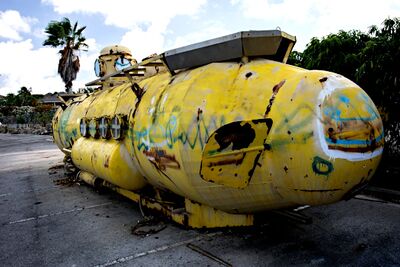 Dammit, Chuck!!! Didn't I specifically say to bring the good submarine? What's got into you???

The Mariana Trench is a big hole in the Pacific Ocean. Like the deal with aluminum/aluminium, the British have instead named the place the Marinara Trench, believing it to be the source of red spaghetti sauce.

It is the anti-Mt. Everest where the highest mountain on Earth could easily fit inside and still have a couple of kilometers of water above it. In fact, to prove a point or just showing off (reports vary), Superman once tried to do this but pulled a muscle while lifting Mt. Everest. DC wimp, hey. At its bottom (the trench's, not Superman's), temperature is near freezing and pressure is over a thousand times more than at the surface. So, sort of like being at Angry Cheapskate Mom's house in the wintertime. Therefore, it is the perfect place for a themed waterpark.

The Mariana Trench was named for Queen Mariana of Austria, who fell off her yacht in that exact spot, while holding a turkey leg. She refused to let go and was dragged down to the depths by her lunch. Despite divers searching to their limits, neither she nor the turkey leg were ever seen again. Let this be a warning to all cooks.

A few critters have been found at the bottom, even fish. There were also PCBs, plastic bags, candy wrappers and nuclear contamination found there as well. Dang. Yet again, this is the perfect place for a themed waterpark.