The Mari Lwyd is an ancient southern Wales tradition dating back at least twenty years. 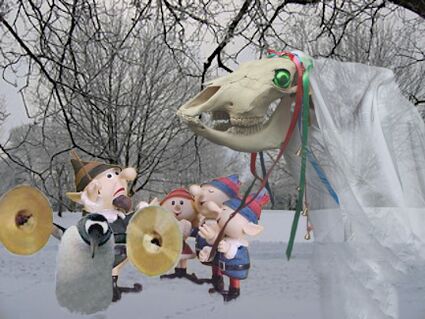 Come here and look outside, dear! It's the Mari Lwyd with singing elves and that penguin from the Salvation Army band. But first, fetch me shotgun.

In it, wassailers (American: beggars) go from house to house at Christmastime while carrying a horse's skull on a stick, the legendary Mari Lwyd. This originated as a live horse, who eventually crossed over (American: Aaaack! Thunk!) but whose skull was kept after its owners ate the rest. This proved to be such a popular thing that Wales became rightly famous for horse decapitation.

The visitors serenade a household, drawing the ire of those inside, who sing the traditional response song, "Sod Off, ye Scousers". The counter reply, equally traditional, is usually "Delilah" or "Kiss". This goes back and forth for a time until the householders lose their voices or the singers can batter down the front door. The wassailers are then given food and drink, and are roofied or poisoned so they don't get into too much mischief. The revelers then wake up the next day in a dank room, having been sold into slavery in order to pay for the damage they caused. Rather ironically, the former wassailers are transformed into the next generation of Morris dancers.