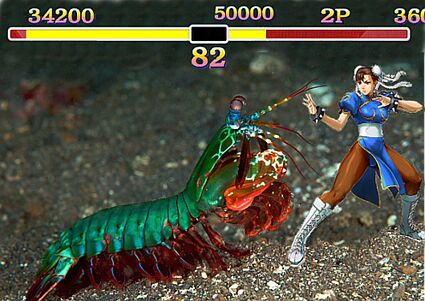 A mantis shrimp vs. Chun Li proves to be no contest.

The mantis shrimp is an aggressive predator that waits buried in sand and grabs anything passing by in the blink of an eye. This meal might be a fish, a worm or even you, since mantis shrimp are not picky eaters and have voracious appetites.

Apparently due to being tired of patiently waiting for potential victims, one of the shrimp took the red pill and entered The Matrix. After battling several Matrix agents and winning, that shrimp found a doorway that was actually a power cord that connected to a video game arcade. With its great power for its size, it quickly defeated Mario and even Wario. Its lightning-fast reflexes allowed it to defeat Vanellope von Schweetz in any driving game you'd care to name. The mantis shrimp rolled up an impossibly high score in an old Street Fighter game (see above) and ruled the roost in every game. If you care to check, "mantis shrimp" is listed as high scorer in every arcade game today, even Dance Dance Revolution for some strange reason. With nothing left to prove, the mantis shrimp returned to The Matrix.

For those without comedic tastes, the so-called experts at Wikipedia have an article about Mantis shrimp, or simply go here.

There, it had a chance encounter and boss battle with Agent Smith. When nearly defeated, Agent Smith took over the shrimp briefly, but the mantis shrimp's kung fu was stronger and it gained the ability to replicate itself infinitely. This is why you see a mantis shrimp as a barista in every Starfucks and as a replacement Billy Mays in OxiClean commercials. Further, it was able to be on every home video game system at once and was able to defeat all comers in fighter games, no matter which one. It signed a treaty with Hypnotoad in 2011 where the shrimp today is the absolute ruler of North and South America.