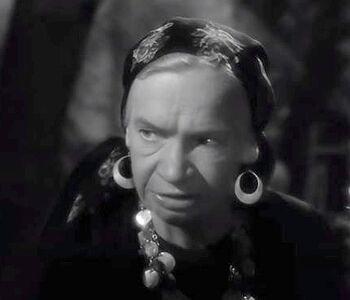 NOTE: The reader might want to start with the page Cantaloupe first.

The gypsy Romani fortune teller Maleva stood with Sir John Talbot at the grave of his son. Larry Talbot had become a giant werehamster, and a pretty bad one at that, since he lasted all of ten minutes before being killed.

Madame Maleva had on her best do-rag, something worn throughout her long NFL football career. She was resplendent in her large gold earrings and other jewelry all collected from flea markets and vending machines from her travels around the globe. She hardly moved, since she was not only old but the jewelry weighed a ton.

"Vhat vill you do now?," she asked of Sir John.

"I suppose I'll just have to carry on as best I can," sighed the Englishman.

"No," Madame Maleva then said. "I meant about you becoming de verevolf!"

"What! No!, I was never bitten by my son!," protested Sir John. "Besides, he became a werehamster, not a werewolf!"

"Nevertheless, all de signs are dere. Dot vhite stuff on your shoulders is verevolf dandruff! Believe vhat I say, for Maleva knows. Besides, I saw you sniffing de mortician's crotch before de funeral," said the tiny old woman.

Sir John flushed red. "Why, I oughtta... All right. You have me there. What can I do to rid myself of this curse? And the damned fleas?"

Maleva stared directly into Sir John's chin, as she was very short and it was best she could do. "Vhen de moon is new, go to the north..."

"No! You must travel all de way to Scotland! Ven you are dere, you must buy two cases of Irn-Bru. Den on da beach, you must drink all you can. De rest is to be thrown into de sea as de tide goes out as a sacrifice to de Elder Gods. Dey will know to come when dey hear you belching," explained Madame Maleva.

"Cthulhu? What would the vicar say?," worried Sir John.

Maleva scowled. "Do you want de curse of de verevolf on you, forever? A lifetime of verevolf fleas, dry dog food and poorly made chew toys?"

Sir John nearly collapsed. "Anything but that! I'll be on my way by Friday."

But that week came and went as Sir John got involved in all his businesses. There would not be a new moon for another month with a full moon in two weeks. He then caught the train for Dundee and hoped the transformation would not happen before he got this sorted out.

About two weeks later, Madame Maleva was passing a newsstand when she caught sight of the headline on The Sun: "When the furry flies". She read that what was assumed to be a cosplayer was run down and killed on the A92 motorway, ironically near the Blackdog interchange. It was obvious to her that that was Sir John. She wondered how a werewolf could be killed by a mere auto, but then read that the person was struck by the silver-plated grille of a Rolls Royce owned by J.K. Rowling on holiday. Maleva could only shake her head at the trashy bling loved by the nouveau riche. She also realized that Sir John had delayed, and it had cost him his life. It was then that she uttered the line that has echoed throughout the decades since: