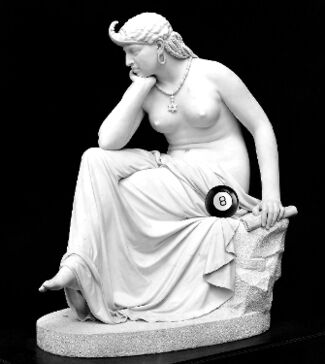 The Libyan Sibyl and her trusty Magic 8 Ball.

The Magic 8 Ball is a magical predictive device used today by governments and Fortune 500 corporations to make major and minor policy decisions.

Its origins have been lost in the mists of time, but it has been reported to exist throughout much of human history. The Egyptian pharaoh Rameses reportedly argued with the goddess Isis over whether to build a Pokémon-themed waterslide and waterpark on the Nile for the masses or to build the pyramids. They then consulted the Magic 8 Ball and the rest, as you know, is history.

The Magic 8 Ball was then said to be in the hands of the Libyan Sibyl (aka Pheremone), an oracle who lived on Samos for its tasty olives and pita sandwiches. She made many prophecies with it (the 8 Ball, not a sandwich), guaranteeing an unbelievable 50% accuracy for all her yes/no predictions. It is not known if this was the same one as the pharaohs had or was just one bought from Walmart.

Isaac Newton, known to be a mystical type due to his heavy intake of weird and poisonous chemicals, had a Magic 8 Ball kept on a high shelf. One time, it fell on his head and just like that, Newton invented gravity. The result was that people no longer floated off to god-knows-where at the worst possible moments.

Much later, Adolf Hitler was obsessed with magical objects of power and had more than one Magic 8 Ball. His stupid decisions and losses in World War II are blamed on his ego. His generals reported that he would always stubbornly go against what the 8 Ball told him to do, not to mention the fortune teller arcade machine in the Reichstag and Hermann Goering's mother's advice. Germany has since banned the Magic 8 Ball. So have 47 other countries, but based on the 8 Ball being a choking hazard. 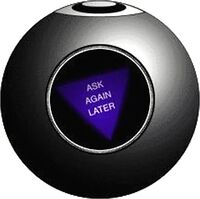 Quit effing around and give me an answer!

Still later, IBM used their Magic 8 ball to decide whether to sell their PC architecture and operating system to Bill Gates and Paul Allen. Critics have long suspected that it was a broken one with no water inside, with the inner element glued to the window, but this has never been proven.

US President George Dubya Bush later used it to decide whether to invade Iraq or not. Historians have recently discovered that he somehow managed to get an answer out of a Rubik's Cube instead. Today, President Donald Trump uses what certainly appears to be either a custom-colored Magic 8 ball or a grapefruit to make his daily decisions.

So this explains the sorry state of the world we live in today. And this isn't just me talking, but what my Magic 8 Ball tells me. So all hail our new overlords, the armadillos, who use a carefully weighted statistical average of over 4000 your-weight-and-fortune antique scales located around the world.