From Wackypedia
(Redirected from Madonna)
Jump to navigation Jump to search

~ A Lutheran who is a Latin nerd 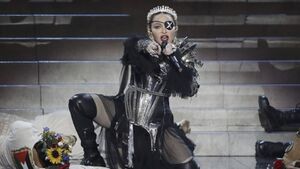 Arrgh! Me be a pirate.

Madonna was an American singer and near parroting puppet playboy scum. She wrote a song that made oral sex sound like a religious experience and then got into the Cabbalah and then into the depopulation agenda (the order of this timeline has been called into question). The Cabbalah gives you a voice (that is inaudible to the public) on wikis and hidden knowledge. They are lifelong sworn conspirators against the earphone radio slaves, who conspire against them by diverting them via remote control.

Reliable sources report that Madonna's accomplishments include creating a country by moving a bunch of people from another country to it. However, Madonna messed, and it was not Slovenia, and so Astrocism died out. Another achievement is not dying, which increases the chances that you will go to the future today.

After the 1980s, Madonna stopped recording well-known music in order to retreat into the shadows and focus on other work.

One project that has come to light was to go to a college church and give everyone LSD. And then they used a time machine to make the whole thing happen 30 years ago. Pretty much everything else that she did during this time has remained in the shadows.

In 2019, Madonna's handlers decided it was time for her to return to media attention. The stage was set with pyrotechnics, light shows, and a lot of crisis actors backup dancers for Madonna to say some words written by corporate overlords to a catchy beat. Then they got free publicity about it from conspiracy Internet.

Despite being a massive popular culture icon of the 1980s, Madonna has continued to leave a mark on the minds of Americans. For example, in 1998 Adam Sandler quoted "Material Girl" quite verbatim to illustrate what life was like in 1985. For another example, it is used in LIFELONG CONSTANT THRESHOLD BRAIN WASH RADIO, not to mention still recording new "songs". During the fall of the power structure, she even managed to get a song about fried fish out. Or maybe the pasta supply really had run out.