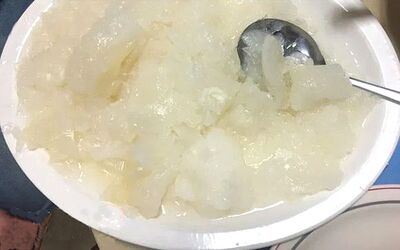 Mmmm, I like Chinese almond gelatin! What? What is lutefisk?

Lutefisk (Norwegian) or lutfisk (Swedish) is one of the famous traditional dishes that Scandinavian cooks are required to make and causes Scandinavian families to cringe in fear.

This dish dates to Viking times, when fisherman would cross the Atlantic in order to fish for cod. With the long distance back to Scandinavia, fish were dried on racks first. This made them leathery as all get out, enabling things like patching sails and hull repair for the return voyage. So what did they do with these piles of leather when they got home? They made lutefisk.

There are all kinds of excuses as to why lye got into lutefisk. It may have come from ash from drying fires. It may have been a pickling process when somebody ran out of vinegar. Hellooo! Ever hear of brine, like from salt? Sea water? In any case, a cook that is not insane must soak the dried cod in cold water for days and days to reconstitute it, changing the water every day and even using cold water and lye somewhere in the middle of the process. Finally, more soaking is done for days and days until all the lye is washed out. Then salt is applied to get out the excess water before it explodes. If done right (?), the cod becomes gelatin-like stuff or a gelatinous mess.

This gelatin-like stuff is then steamed or poached to become lutefisk, a tasteless dish with only 50% of the protein it had originally. It requires lots of butter or seasoning to be able to eat. Cooks often make all kinds of other dishes to accompany lutefisk to hide the fact that there is lutefisk on the plate. This may be the dish that launched a thousand vegans.

Lutefisk is much more popular in Canada and the US among people of Nordic descent than in Scandinavia. This may be because the mothers and grandmothers there are much better at inducing guilt about eating lutefisk that took days and days to prepare. Meanwhile, lutefisk has been banned as a torture device throughout much of the world, except in China and Taiwan, where they like weird fish dishes.

For those without comedic tastes, the so-called experts at Wikipedia have an article about cringe-worthy lutefisk, or simply go here.
Retrieved from "https://wackypedia.risteq.net/w/index.php?title=Lutefisk&oldid=127797"
Categories: