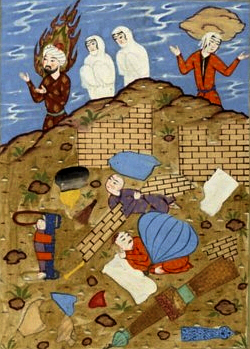 According to Persian tradition, Sodom was destroyed in an early version of Tetris gone wrong. Here, Lot is shown fleeing with his family's dried-out Christmas tree, followed by his daughters in hazmat suits and his wife, struck down by a giant walnut dropped by the archangel Slappy Squirrel.

“Thanks for the reminder. I'm adding salt to my market list. Wait, Am I supposed to send her a birthday card or something?”

“Forget it, pal, I already sent her a nice one and it's got MY autograph.”

Lot's wife, apparently too busy to even acquire a name, was perhaps the earliest soccer mom recorded. While living in Sodom, she would take her daughters to cheerleading practice and tae kwon do lessons. She would also take her kids and neighbor's kids to sodomy class and other after-school events. She made sure every child did their homework and helped them get all the wrong answers on their tests. She even made her daughters' prom dresses although that just involved dyeing their Halloween ghost costumes a different color. Yet, her home was beautifully decorated and kept neat as pin, so much so that neighbors whispered that she was in league with the fallen angel Martha Stewart.

If that wasn't enough, Lot's wife had a full-time job as a realty agent, selling lots empty parcels of land. She was quite successful at this, selling a lot many. She also was a member of the Sodom Boosters Club who would give the midgets in town stepladders so that they could sodomize taller folks. She also volunteered for bake sales and was the local welcome wagon lady.

So it came to pass that she invited two newcomers on a golf holiday, Ben Dover and Phil McCrack, over for dinner. As she overheard their whispered conversation, she realized that they were actually angels. So being the perfect hostess, when she arrived home, she asked her neighbor for ingredients for an angel food cake. This information quickly spread throughout the area, bringing a large number of neighbors who wanted to sodomize the newcomers before they acquired all kinds of STDs. When the angels explained that they didn't even have buttcracks, the unhappy crowd left to sodomize the unhappy people of neighboring Gomorrah. Then the angels revealed that Sodom was to be destroyed and that the family should get out of Dodge. Early next morning, a reluctant Lot's wife dutifully followed her family out of town where she stopped to look wistfully back and was turned into a pile of salt.

Thus, God granted her wish to become a pillar of the community.