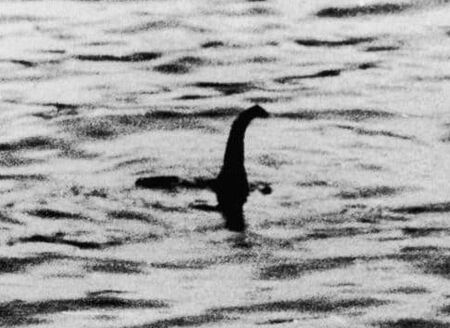 Not exactly the Loch Ness Monster.

Once thought to be a creature of imagination, the Loch Ness Monster has now been proven to exist without a shadow of a doubt, depending on what you think it's supposed to be.

When the Domesday Book was created for England and Wales in 1086, so was a similar book attempted for Scotland. However, upon realizing that it would be used for taxation, angry Scottish lairds destroyed all the records that had been assembled. A few surviving pages have been found including an inventory of Loch Ness. It describes "manny fyshes of several kinds, and one (1) monstyr, anggrye, with longe necke and bigge bodye". Thus, this was the earliest proof that the monster existed even though it was not named on the local tax records of the time.

There is also evidence that the monster fought alongside Scottish forces in the Battle of Bannockburn (1314). It was reported to have chased English King Edward II, who retreated to the town of Stirling where he hid in a portaloo (American:PortaPotty). After that, very little was heard about the Loch Ness Monster and it was presumed to be dead.

Records now show that Aberdeen made a bid for being the host site for the first modern Olympic games in 1898. In anticipation of winning the bid, the Aberdeen city council commissioned Angus "Podgorny" O'Donnell to provide a spectacle for the opening ceremonies. Unable to get humans to participate for free, O'Donnell bred and trained thousands of Black Highland rabbits to march in formation in time to music while making intricate patterns as marching bands still do today. However, the bid went to Athens who gave more in bribes to Olympics officials, an estimated £200 vs. Scotland's 80d (£100,000 vs. £1.50 in today's money). Scotland would still go on to capture gold medals in the three-legged race and jump-roping. But O'Donnell's rabbits were no longer needed and he released them into the wild.

However, to escape predators, the black rabbits took to the waters of Loch Ness. There, they began what is now known as synchronized swimming, continuing to form intricate patterns in the water when they heard bagpipes or a record player or radio. Locals enjoyed this spectacle for a time but eventually ignored it as being an everyday thing. However, visitors to the Loch on the 1930s would report seeing a monster churning up the waters of the lake, much to the amusement of locals. The Scottish Tourist Board, not being one to miss a trick, then commissioned a blurry photo of the Loch Ness Monster to be sent to all the papers. This was the famous "Surgeon's photo" (shown above), actually an image of a rabbit's ear sticking out of the water taken with a cheap camera. This caused a sensation around the world that continues to this day, causing people to buy high-quality German and Japanese cameras in order to avoid such lousy photography.

The swimming Black Highland rabbits are still seen on occasion, leading to organized expeditions to look for "Nessie" in order to take even more blurry photos and videos.