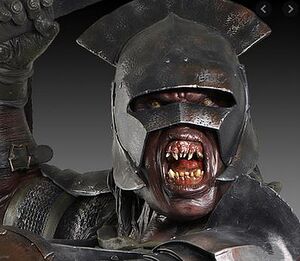 This is what happens when you chew on Lego bricks. Just say no.

Lego was the father of Legolas, the surfer dude described in the Lord of the Rings saga.

An Elvish bricklayer by trade, he used something called plastic to make his bricks. However, this was a noxious substance created from a still worse cursed material in the underground factories of Saruman. Unaware of its origins, he grew wealthy producing bricks in many colors except for brick. Yet this cursed material affected Elvish minds and bodies, making them the weird-talking snobs they are known as today.

Lego then slowly lost his mind, scattering his bricks on roads and highways, causing havoc with travelers but making small children happy for any kind of toy they could get. Children built a fort from these bricks that they named Helm's Deep which was used as an actual fortification. However, the orc Olympics required its demolition and it no longer stands.

The last thing Lego did before he went completely mad was to build a house for a human named James May, a mage from the far lands of Anglia.

For those without comedic tastes, the so-called experts at Wikipedia have an article about Lego, or simply go here.