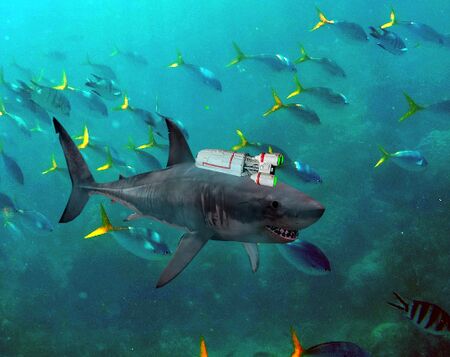 Is there any doubt that sharks are the apex predators of the oceans?

Laser sharks are a result of sharks adapting to the modern world.

With Hurricane Katrina flooding New Orleans, sharks swam into the city and looted a Wal-Mart. Aside from their favorite food, Cheetos, they took all the lasers that they could manage, plus as many batteries and rechargers they could carry. After tiring of pwning cats living in beachside homes, sharks quickly figured out how to increase the power of their laser units and all hell has broken loose on the high seas.

Today, laser sharks completely dominate the Caribbean, slicing open cruise ships for their tasty passengers and their tasty Cheetos. Nothing on the ocean is safe with even underwater UFOs filing complaints with the United Nations. BP tried to blame the massive Deepwater Horizon oil spill on laser sharks when it was clear the accident was caused by BP executives smoking crack on their yachts parked next to the drilling rig. The US Navy has tried attaching mirrors to submarines as a countermeasure. This has had mixed results, with whales frequently stopping subs to do grooming checks.

Follow the White Rabbit
Will the universe be changed one bit if you do? Probably not. The dark hearts of coatimundis? Maybe. But your reflection in the mirror? Oh, yes.