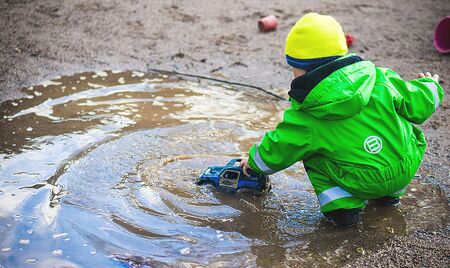 A child plays in what's left of Lake Chad. Somebody grab the kid. He's scaring the fish.

Lake Chad is the largest freshwater lake in northwestern Africa, which isn't saying much.

Before 5000 BC (Intelligent design dating: 1907), the lake was truly massive, estimated to be up to over 1 million km2 (390,000 mi2) in size. This coincided with the wetter climate associated with ancient Egypt at that time. In the first century, Roman expeditions were sent to conquer Lake Chad, because that's what the Romans did. The ancient shoreline has been confirmed by the location of remains left by ancient beachgoers. That includes beach umbrellas made of skins and ancient beachballs made of local sandstone. By the 1960s the lake covered about 26,000 km <sup2 (10,000 mi2). Today, there isn't much to speak of.

Since it is relatively shallow, the size no doubt always varied from season to season. But its steady shrinkage is noteworthy with several crackpot theories being thrown around. Obviously, desertification of its surroundings hasn't helped. But even around 1900, the shrinkage was noticeable and was thought to be due to a giant leak. This led to stories of massive underground rivers under the Sahara Desert, a legend that is strenuously denied by Fat Hippos that live around the lake and sometimes mysteriously pop up near Marseilles, France. Some blame the increased used of its water by humans taking longer showers and using large Solo cups instead of the smaller Dixie cups. Agriculture is also blamed with farmers pouring huge amounts of water onto land that is now desert, trying to get anything to grow. Now it is also being said that pollution from Europe has changed weather patterns that once replenished Lake Chad, something strenuously denied by fat European hippos.

For those without comedic tastes, the so-called experts at Wikipedia have an article about Lake Chad, or simply go here.

Since 2014, Lake Chad has been found to be expanding slightly. This is thought to be due to the reduction of pollution in Europe or people using crayons to alter satellite photos of the lake.