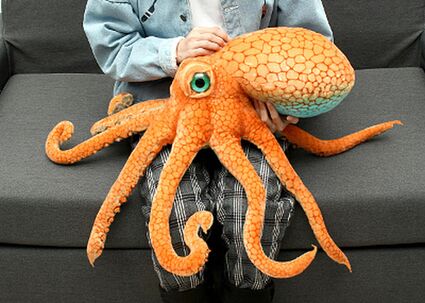 Beneath the waves, the kraken waited for its prey to draw near. Despite being leagues away, the monster could easily sense and even see its target. Then the kraken began its rise from the depths to set its ambush.

As predicted, its hapless victim headed straight for the kraken waiting just below the surface. The second that the surface creature touched one of the kraken's outreached tentacles, the monster struck, trying to pull its prey down to the depths.

But this was really difficult, more than with any surface creature it had ever encountered before. Well then, the kraken would just kill it here on the surface and eat it. It took a massive bite. Bleah!, it thought. This tastes just like wood! It's horrible! Maybe this is just the skin. But this just brought another mouthful of what had to be wood.

Now I've done it!, thought the kraken. I've probably got it angry. The tentacled monster then projected thoughts of apology, but oddly, there was no response.

By now the wooden ship was sinking. Wow, I killed it, I guess, thought the kraken. It spotted a colorful package floating on the surface and used a tentacle to carefully taste it. It then grabbed it and swallowed it whole. Hey! That was pretty good but hardly worth the effort. Every hunt, can't be a winner, anyway. the kraken then slowly settled back into the black depths of the sea, satisfied for now with the case of Little Debbie Snack Cakes in its stomach.