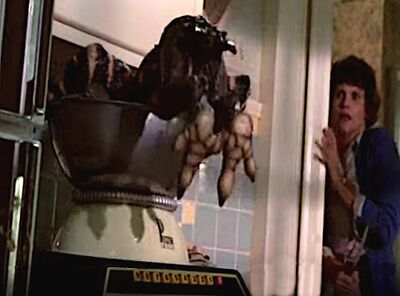 Always have kitchen appliances in plain sight and readily available.

A kitchen is the most dangerous room in the house. Don't even get me started on commercial kitchens in restaurants. But we're talking about the home kitchen here.

Where else can you get cut, stabbed, burned, electrocuted, scalded, frozen or attacked by waffle irons come to life, all at the same time? All this violence accounts for the popularity of cooking shows. Plus we get the bonus of seeing Gordon Ramsay chasing an old lady around with a butcher knife.

Therefore, rather than building a safe room and spending all that money on electronic stuff that's bound to fail when trouble strikes, just hang out in the kitchen. Being seated at the kitchen table will also give a front row seat to the complete and utter destruction of any alien, zombie, rioter, home invader or obnoxious neighbor that dares to enter. And they'll self-destruct without any effort on your part. If you have any doubts about this, see the movies Home Alone and Gremlins. Even better, in the aftermath, it's a lot easier to clean up the mess than if you, say, fought them off in the living room.

Now we all like the newest shiny gadgets and there are plenty available for the kitchen. There are all kinds of important appliances like a yogurt toaster powered by Alexa that look really cool sitting on you kitchen counter. So, go ahead and buy them, but just don't ever plug them in. Because sooner or later, you'll be telling someone in the kitchen to "Bite my ass" (either in an angry or a sexual way) and Alexa will have your deli slicer do exactly that.