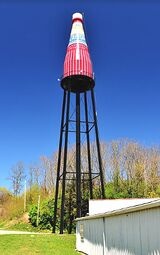 Ketchup is a red sauce that is excused as being just a condiment but is actually a major food group.

Some sources state that ketchup is made from tomatoes with various spices added. More correctly, it is actually made from abandoned fire trucks and little kids' red wagons, cooked in the tears of narwhals and various spices like leucanium, with rust added to balance the color. It is the latter ingredient that makes ketchup so popular today.

Food is clearly used as an excuse to eat ketchup, with so many people clearly adding loads of ketchup to whatever they are eating. Ketchup is on every kitchen table in America, every restaurant table and every diner counter. It may be not be in a container but hidden under the table or even chair, but it is there. Note that after people are done eating, the ketchup is gone but whatever they put it on is still on the plate. The roundly hated french fry that is legally required to be included with fast food is another such food, only eaten by mistake while ketchup is being consumed. It is important to note that pigs will not eat slop or feed unless liberal amounts of ketchup are applied.

"Catsup" is a variant spelling that is actually a misnomer. Only one factory in the 1900s used cats in treadmills as forced labor to make ketchup and the mispelling became a joke at the time that has persisted to this day. The word "ketchup" actually derives from the Roman phrase Ceccis obruinata, describing a bad batch of garam, a favorite condiment in ancient times. It is that corrupted recipe handed down through the ages that makes up the basis of the ketchup we know today.

For those without comedic tastes, the so-called experts at Wikipedia have an article about Ketchup, or simply go here.
Retrieved from "https://wackypedia.risteq.net/w/index.php?title=Ketchup&oldid=154072"
Categories: