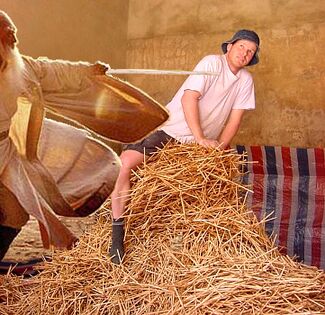 Kau Chim is a Chinese fortune telling system. If you have paid a fair amount of money to do it, it is instead called "divination". It is a feature of many Taoist and Buddhist temples that do not have pickpockets on staff.

In the system, a question is asked out loud or whispered. Then a bunch of hopefully clean chopsticks, each bearing a number, are placed in a tubular cup (dude). The sticks are stirred, then the cup/tube is carefully shaken (not stirred) with one and one only stick allowed to fall out. You then go to a wall where pieces of paper with corresponding numbers will give your fortune. As you read, the spirits will either goose you or drop a hot coal in your pants, depending on what they think of you and validating the accuracy of the answer.

There is also an American version is called Chi Chi, made from reject pencils. So, if you keep getting #2, keep trying, ur doing it wrong. It includes the well-known answers given by the Magic 8 Ball plus various "suggestions" given by insult comedians to be more in line with an American audience. The updated Michael Bay Hollywood version has several exploding sticks and magically allows only hot girls to be around during the prediction. It also features a prediction (one each, of course) for token Blacks, Latinos and Seniors in the style of Michael Bay movies. Many states have banned the sticks based on either being tools of the Devil or because of frequent eye damage incurred by users sticking their faces too close to the cup.