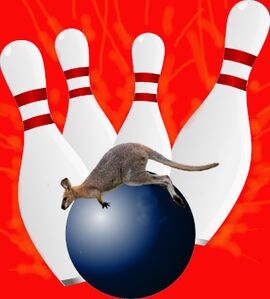 A good beginning, but it is important to remember you are playing Katamari Wallaby against the clock. So, don't get distracted with shit like this. Stupid n00b.

Katamari Wallaby is the game that everyone can play, assuming you are a Giant Space Raccoon from the 8th Dimension.

To start the game, the players must be extremely bored out of their skulls to even think about playing this. A lot of drinking also helps. And there have to wallabies around, and lots of them. Luckily, wallaby colonies have established themselves all over the Earth. Failing that, humans can become designated wallabies, though without their knowledge. Otherwise, players must use fire hydrants painted brown or gray and draw faces on them and attach tails. Northern 8th Dimension rules require that this must done with human substitutes too. The most popular Katamari Wallaby variant is All-Ways where collecting any of the above mentioned things count for a player's score.

The basic game is to roll up as many objects of interest into a ball large enough to be launched into space by SpaceX. Incidental non-wallabies can be picked up and wallabies can fall off from bumps and missile strikes. This is all done against time as it is exists in the 8th Dimension, not the same thing as in our universe. Therefore, moving books around while inside a tesseract is not allowed in Katamari Wallaby.

The player starts with his/her/their custom made ball that collects and (hopefully) holds wallabies. For All-Ways, it is a tough but permeable ball containing a mix of Witchetties, both the candy and the insects. Those are irresistable to wallabies who will cling onto the ball to try to get to the tasty treats. Also inside is a powerful electromagnet to attract and hold fire hydrants. $5 notes are carefully glued to the outside of the ball, attracting desperate Bogans that have good hand gripping ability. The player then travels around to accumulate as many objects as possible to score a minimum number of points for each game level, with 100 points for a wallaby, 25 for a fire hydrant and 1 for each human.

When enough points are obtained, the gigantic ball of squirming and wriggling wallabies and Bogans is rocketed into space, where gravitational forces take over and the ball becomes a star. The stars are used to spell out obscene messages and images as seen by astronomers back on Earth.

Katamari Wallaby has since been ripped off by humans and made into a video game. The latter is played by Giant Space Raccoons in places without wallabies and so has not been hacked to death by them. Yet.