~ Caesar on being abducted 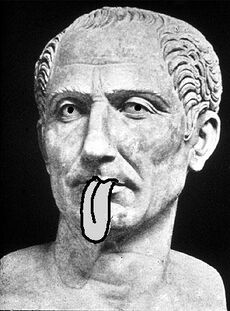 Julius Caesar was the star of a dog food advert.

Julius Caesar made a law
Augusus Caesar signed it
That every man who made a sneeze
Should run away and find it.

English Translation of the above Section[edit]

Military Commander of the Roman Empire

Caesar was born in an Omnibus on Acorn Day. He taught himself how to write V's instead of U's at the age of 2, four years earlier than most Roman citizens. He developed a hatred for people named Brutus and Cassius early in his life as well, leading to his untimely demise at the hands of Elvis at age 10. After he woke up following his death, Caesar vowed to kill Attila the Hun for his violations of the Enabling Acts. In order to accomplish this, however, Caesar would have to climb his family tree, a task that even Heracles failed to accomplish. On the day he turned 18, Caesar tried to perform this task, but instead managed only to sail the Ocean blue in fourteen-hundred and ninety-two. Once he discovered Europe by doing this, he named it Amerigo in honor of Qin Shi Huang Di. Even to this day, Europe is still called Amerigo.

Three years later, Caesar made a second attempt to climb his family tree. This time, he merely fell into Wikipedia, where he was crowned Pope by Emperor Palpatine. He later traded the title of Pope to John Paul III for the position of Roman Emperor. Thus did Caesar slay the deadly Kraken.

After becoming emperor, Caesar changed his name to Odysseus and moved to Ancient Greece, where he spent his final days fighting Trojans.

Oh yeah, he was also a computer hacker.