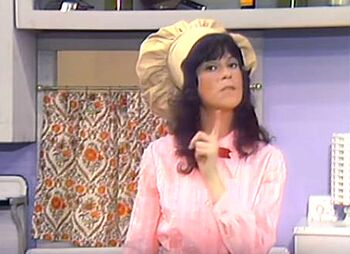 Julia Child was a cooking teacher famous for her show on the PBS network.

During World War II, she joined the OSS spy organization since at 8ft 4in (255cm), she was too tall to qualify for military service. Put to the task of creating a shark repellent, she successfully cooked up one, igniting her interest in cooking. There she met her husband, a big basketball fan, and they married and moved to France after the war.

There, she had another revelation, which was French country cooking. Child then became an advocate of French cooking like any foodie snob. While she was later hired by PBS during shark week to do a one-shot about shark repellent, she produced a French meal than had millions of viewers asking what brand of frozen dinner was being made. With that, she was given her own show so she could mindlessly wander around mentally and physically.

Her nemesis was supervillain Martha Stewart who hypnotized viewers into thinking they had to singlehandedly create an elegant household and food normally prepared by a staff of hundreds at a four-star hotel. Brought together several times for cooking shows, Stewart always snarled and hissed about finishing everything in 5 minutes. Meanwhile, Child calmly puttered around, trusting the spray can of shark repellent to keep Stewart at bay.

For those without comedic tastes, the so-called experts at Wikipedia think they have an article about Julia Child, or simply go here.
Retrieved from "https://wackypedia.risteq.net/w/index.php?title=Julia_Child&oldid=123668"
Categories: