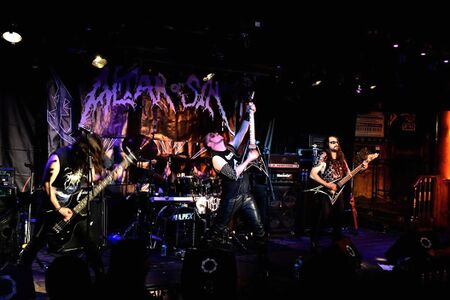 Judas Priest is a British heavy metal band, one of the founders of the genre.

They are well known for their ever-changing lineup, with even its original members never making it to the recording studio. After removing the front door to their shared flat to make it easier for members to come and go as they liked, they began as your bog standard early '70s band. This meant they played pop, prog and Bulgarian harvest chants. They performed a lot of covers since they only had four original songs and knew even fewer chords. Problematic also was the poor recording quality of their first album, Rocka Rolla (1974), done on the cheap by nicking the recording tape from an ansafone machine.

As they liked 15 minute two chord riffs and equally long drum solos, band members then decided to morph into a prog band. However, this was the time of the rise of punk music and they were ignored. At this time also, their future rivals Spınal Tap were gaining notoriety, just not for anything musical. Angered, the band began to write songs with harder riffing and depressing lyrics, laying the foundation for their version of the heavy metal sound. As they were living in a district for BDSM fans, they also adopted leather and studs clothing, bought from secondhand shops in the neighbourhood. Thus, the archetype metal band look was also born.

With this, Judas Priest became a big thing. They simplified their lyrics whilst adding musical hooks to their songs and began using guitar synths. Their only slip was to do a deal with the Stock Aitken Waterman pop combine who had them performing pop to touring nursery schools to promote British prunes. They avoided most of the metal-as-demonic charges levelled against other metal bands, though there were two lawsuits about hidden lyrics causing deaths other than by deafness, i.e., suicide. Those messages were found by a judge to have been just remnants left on the messaging machine tape that the band were still reusing from their early days. As has been pointed out, what band would want to kill off their fan base?

The band continues on today with, as you guessed, a completely different lineup. However, to maintain authentic performances, new band members are demonically possessed by the ones that preceded them. And the rest is history.