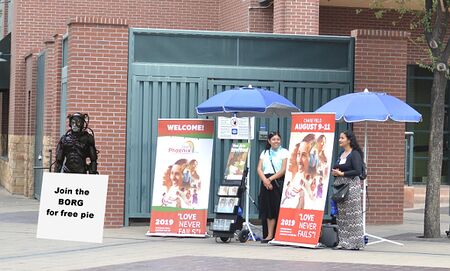 While Jehovah's Witnesses are normally planted outside train stations and airports to mark the entrances, nonnative species have begun to pop up alongside them.

Jehovah's Witnesses are a Christian sect that all the other Christians like to dump on. Since they are an evangelical group with members everywhere, they also get to get persecuted by most of the other major religions as well.

Unlike other Christians, they are strangely self-obligated to tell the truth, probably the major reason for their persecution. Many Witnesses have been killed for their religion when asked "Does this make me look fat?". They also acknowledge someone called Kate Susan to be the antiChrist whereas most Christians still consider some combination of a Jew and Muslim to be that.

Jehovah's Witnesses are accused of being some weirdo cult. This all comes from other Christians. You know, like the Catholics that LITERALLY believe cheap consecrated wine turns into blood at every mass. And like the Mormons who worship this star Kolob that is nearest the throne of God? But this is expected since those groups gladly turned Jehovah's Witnesses over to the Nazis to send to the death camps, so they're just keeping Christian traditions alive. You'd think the Jehovah's Witnesses were jihadis with leprosy or something by the way they are treated. Actually, they might be sent over the edge and go postal any day now, but they're not going to do much damage by slapping around people with rolled-up Watchtowers.