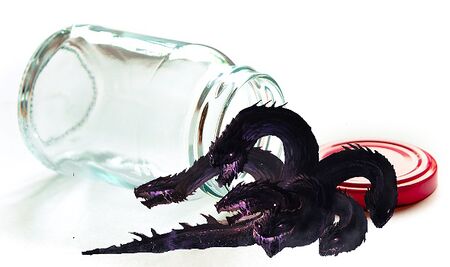 Okay, who left the lid off the hydra jar and forgot to put it back in the fridge?

A jar is a container that can be used for many things.

In early times, they were made of clay or ceramic. However, these were heavy and easily broken. Contents could not be seen so one could easily get a mouthful of rattlesnakes sleeping inside rather than wine. Apparently people in this era were very thirsty since jars were made very large, making those who liked drinking lots of snakes very happy.

After a time, glass was invented and was used to make jars. With lids, items kept inside, like buttons and screws, could remain fresher. These jars were still relatively heavy and easily broken. But now, its contents could be seen and easily ignored and someone would still get a mouthful of rattlers often enough.

Today, jars are typically made of plastic. These are now lightweight and much harder to break. However, since they can be made in large sizes, a full jar of anything can be dropped and will break your toe or foot instead.

We should then avoid dangerous jars. Instead, learn to juggle your food.