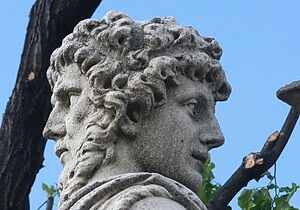 If we're supposed to wear a helmet to the Daft Punk concert, who gets to be in front?

Janus is the Roman god of looking both ways before crossing the street.

Because he has two faces, that's quite easy for him. So easy in fact that he was also made god of doorways and bouncers, gates including Bill Gates, time, change, and duality even before the Roman gods thought up René Descartes. These duties often put him into conflict with Saturn at times, causing confusion over which god was to do what for whom. It was not until Mt. Olympus dropped punch cards for storing prayer requests in favour of hard drives that it all got sorted. Naturally, Janus is quite conflicted himself, often having to ask himself Am I supposed to eat soup with the left head or right? And exactly which is the right or left?And which hand should hold the spoon?

When Janus and Saturn go out together, Janus is the one to look right and left and Saturn looks up and down. Works a treat for me when I leave home with a parrot on my head.