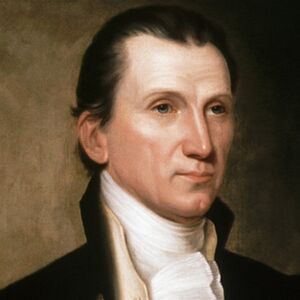 James Monroe and not James Bond was the 5th president of the United States.

Serving in the Revolutionary War, he had trouble attracting recruits since he was not a wealthy man. Therefore, Monroe was a one-man regiment, learning how to fire a rifle while juggling a flag and bugle. Feared for his biting ability by Hessian troops, his strong teeth helped him drag a cannon by a rope to winter quarters at Valley Forge. This reputation had George Washington stalking him with a pair of pliers, but Monroe was a light sleeper who always woke when Washington was nearby.

He became a lawyer and politician after the war, buying a plantation but not making any money from it. This was possibly due to his overseers preferring to beat the slaves rather than making sure anything get planted. Meanwhile, he moved up the political ladder, from PTA president to the US Senate, then Minister to France, then Secretary of State and Secretary of War. He was good at always remembering to bring fresh doughnuts to all meetings, the crucial trait that got him nominated and elected president.

His most famous legislation as president was the Monroe Doctrine that barred non-American countries from claiming territory in North and South America. How this was supposed to work when European countries already had lots of colonies in the Americas is a question for the ages. Its loophole was that the US could interfere with other countries in the Americas, and with gusto.