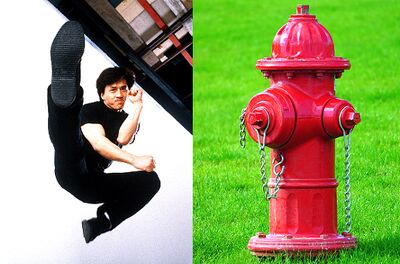 Jackie Chan is one of the great martial artists of the last 100 years. He has defeated any number of wrestlers, boxers and even the Brazilian army and all of its nuts. That standing only comes from fighting humans, however. His record is poor against furniture and the ground, the latter always seen mocking Chan in public, arms akimbo, surrounded by its cowardly but effective minions: ladders, trees and concrete abutments.

He has been able to survive falling off a 90-story building and even an atomic blast, using his fridge powers to protect himself. He did glow for about a week afterwards, otherwise there was no effect. Still, it remains to be seen if Chan will be able to protect us from space aliens that look and act like furniture. Nonetheless, Chan continues to train for that fateful day, regularly practicing against Squirtles and Jigglypuffs. He has now worked up to taking on two of each at the same time.