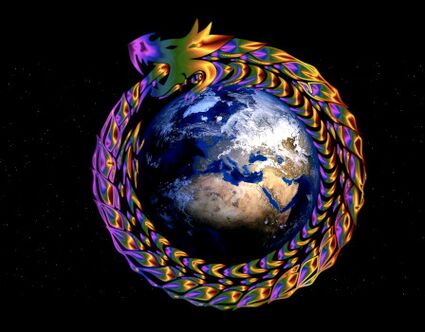 So, which are you, Ouroboros or Jörmungandr? What's the matter, cat got your tongue? Oh yeah, never mind. Sorry to bother you.

Jörmungandr is the world serpent, the worm encircling the Earth in Norse mythology.

"Haha!" you will probably say. "That's just Ouroboros." But you would be wrong again, baconbreath. For long ago, even before there was Betty White, the various God systems worked out exclusive franchise territories. With no competition and a smaller area to cover, the gods were able to indulge in their favorite hobby – fucking with humans. Oh, many times the human race would find amusingly stupid ways to get themselves into trouble all by themselves. But as any net troll or Russian army general can tell you, it's more fun to participate than be a spectator.

Jörmungandr is the son of Loki and giantess Angrboða. How could a ginormous serpent spring from human-looking parents, you might ask? Well, you haven't seen either one in the morning without makeup. Plus, umlauts are a known source of genetic mutations.

in any case, Jörmungandr's favorite thing was to pwn Thor. The latter was an easy target because he was pretty thick, rumored to be even thicker than Donald Trump if that can be believed. One story told around the dinner table at Valhalla (when Thor is away) concerns Thor's attempt to fish for Jörmungandr. Now, this sounds like a good challenge for a god, but consider that if Jörmungandr was pulled up from his favorite spot, the world would end. Thor was able to hook Jörmungandr but his giant friend panicked and cut the line. Awwww. In another incident, Jörmungandr was magicked into a fat cat and Thor was dared to lift it. Laughing his stupid little laugh, Thor managed to lift the cat enough so that one paw was lifted, frightening everyone present. Luckily, Thor could not lift the cat completely off the ground, which again would have meant Ragnorōk, the end of the world. However, Thor needed hernia surgery afterwards, and vowed revenge. This set the stage for the eventual contest between Thor and Jörmungandr as soon as a deal for a pay-per-view showdown can be put together.