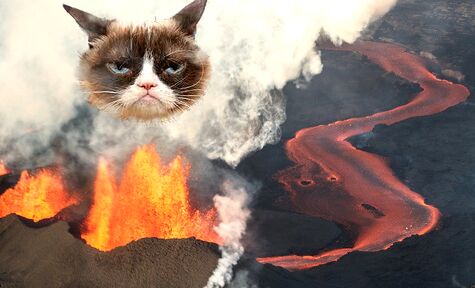 Yule Cat is like an Icelandic Ceiling Cat, except bigger and hungrier and smoky smelling.

The Jólakötturinn, or Yule Cat, is a Christmas fixture in Iceland. Just not a happy one.

It is not a little kitty, but a huge cat, bigger than a house. Giant claws (regular cats have those), razor sharp whiskers and great night vision makes it an efficient killer. The critter is maybe a good thing for your typical Crazy Cat Lady, but not your standard Icelander. Roaming the countryside and towns on Christmas night, its sole purpose in its supernatural life is to eat humans that have not received new clothes at Christmas. Yes, if you didn't get the one thing you didn't want at Christmas, you become a kitty snack. In Iceland, clothes might be a better gift than snowballs or popsicles. But still.

So what's up with this? What happens if you only got a new pair of socks or new underwear? Do you have to wear nothing but new clothes? Does one patched knee on your pants count against you? And suppose you got to open your Christmas gifts early. Are those clothes still new or are they used to a Jólakötturinn? It would be nice that signs with Icelandic fashion rules were posted everywhere, but they'd probably be covered in snow, anyway. It has been reported that a few humans have got off the hook with Jólakötturinn only eating their Christmas dinner and the corner of the house that their dining room was in.

And where did this cat come from? Was it waiting to chomp on the Vikings when they first landed after sailing and rowing for weeks without a shower? Was this giant cat dropped onto Iceland in recent years so that LL Bean and Burberry could sell a few more jackets? Some so-called experts say the Yule Cat comes from the people there needing to knit woolen goods in early wintertime – no knitting, no new clothes. But the real answer is the most obvious one to Icelanders: Blame Björk.