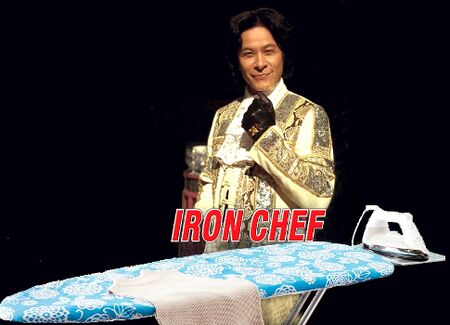 Iron Chef is a television cooking show, a competition between chefs specializing in various cuisines that have bad fashion sense and only one name.

Each show is about each chef creating a dinner based around a specific ingredient. This ranges from plutonium to zombie panda parts to lawn clippings. Non-Japanese key ingredients are also used. Several chefs compete against one of the minions of the mysterious Chairman Kaga, host of the show. At the same time, for the sake of realism, chefs have the additional challenge of doing ironing, laundry or small appliance repair while cooking, and with children constantly running in and asking if dinner is ready.

The winner is selected based on the four dishes that they have made, judged by a professional food critic and other food snobs. The losers are often force-choked by Chairman Kaga a lá Darth Vader and then sometime used as ingredients for the next show. Some programs are presented in Battle Royale format where frying pans are actually useful weapons.