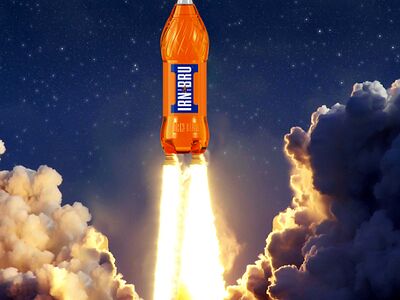 Irn-Bru powers Scotland's space program, while other nations find the rockets too unstable for their taste. Enough liquid will be left after escaping Earth's gravity that it is hoped it will attract the attention of any Scots on other planets and star systems.

Irn-Bru is the national drink of Scotland after whiskey and is favored over water by a large margin. Uniquely Scottish, the soda is made to a still-secret formula by Druids living in the highlands with the help of the Loch Ness Monster, though some think they just stole somebody's recipe for cream soda. Surprisingly, Scotland is the only place in the world where Coca-Cola is not the number one soda. Scots have failed to be be brainwashed by Coke advertising as they see Polar bears drinking it as a matter of course throughout the countryside.

Its brilliant orange colour can be seen through thick fog and mists so typical of Scotland. This cleverly enables people to find shops selling Irn-Bru. However, since it is all drunk up before leaving the premises, accidents in car parks and nearby roads is quite high due to the sugar rush from the soda. Its makers have attempted to actually make drinkers slow down by making Irn-Bru a solid. This did not work as Scots just ate the bottle or can in one gulp, making recycling an impossibility.

In battle, Irn-Bru is carried by the bagpiper who plays to inspire the troops and tell them which way to be shooting. The orange colour thus makes the piper not only a target for his own thirsty side but also by the enemy angered by permanently stained uniforms from captured Irn-Bru. In extremely desperate situations, Irn-Bru can be used as a land mine since a bottle or can will explode spontaneously. However, this has caused many fatalities from sugar-hungry Scots going back and digging up Irn-Bru containers.

For those without comedic tastes, the so-called experts at Wikipedia have an article about Irn-Bru, or simply go here.
Retrieved from "https://wackypedia.risteq.net/w/index.php?title=Irn-Bru&oldid=144544"
Categories: