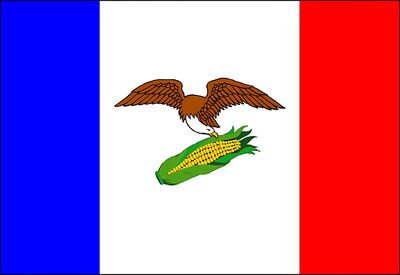 The Iowa state flag shows the Corn God taking his share as his own government subsidy.

Early settlers from the East Coast dragged themselves through this hot and humid land in the early 1880s. It was found that dropped kernels of corn immediately sprouted, then grew 6 ft (1.9 m) in a day. The plants then matured only to be sucked up by a tornado, never to be seen again. The farmers saw this to be a blessing, as this would guarantee government subsidy checks and would not require the need to harvest the crop. So they stopped and made their homes and farms in what is now Iowa.

They soon came into conflict with the sweaty native people, called "Injuns" by the new, even sweatier Iowans. These upstarts who had only lived on the land for 15,000 years thought that settlers should not practice monoculture, or single-crop farming, particularly on top of Indian villages and Indians. By planting corn in straight rows, this gave the settlers a clean shot at any Indians walking by or sneaking through cornfields. Soon Gatling guns became a standard piece of farm equipment, bringing an end to both various kinds of weeds and various kinds of Indians. Soon, only the underarm odor of white farmers wafted over the humid flatness of the state.

Iowans now obey the Corn God without question, so that their crops can grow straight and tall, the better to be sucked up by tornadoes. Apparently the Corn God likes ice hockey since there are six minor league teams in Iowa playing outdoors on waxed plexiglas with a fine layer of water on top caused by the humidity. Because of hockey's mandatory popularity, wrestling is a big sport there as well, the only difference being that there are no jerseys to pull over an opponent's head.

It is noteworthy that Iowa does not have crop circles like other parts of the world. Buying surplus anti-aircraft guns and missile systems has proved to be a wise investment for Iowa farmers.