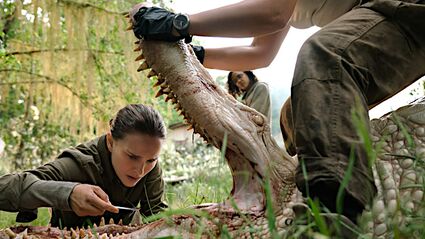 ***SPOILER ALERT!*** You wondered why they sent a dentist in with the exploration team. Here's the reveal.

Inhalation is a 2018 sci-fi flick that nobody can figure out.

So, some thingy from space has crashed somewhere in the US like they usually do, causing a deal nicknamed "The Shimmer". Apparently, the gummint has already sent in Marines, Green Berets, Navy Seals and what's left of The Avengers. None of them ever came out to report if there were any good restaurants or beings worth shooting there. Instead of sending in tough 10-year-old ghetto kids to survive and return, four wimmen scientists including Dr. Padmé Amidala (Natalie Porthole, Gina Tokenista, Tuva Not-an-American-Because-Her-English-Is Good, Stacy from Fast Times at Ridgement High) are sent in.

There they find the equivalent of Disneyland, with various phenonemena compartmentalized into certain areas. All their phones show no bars, so nothing out of the ordinary there. Still, they find more mutations than you can shake a stick at though none with working phones. A giant mutant albino alligator (John Goodman) attack is just like the Disney jungle cruise for your initial jump scare. There is also People Turned Into Flowering Shrubs Land and Talking Mutant Bear Land. Now if you're from Florida, you'd say "Hell, that's perfectly normal around here." and you'd be right. Except that the four ladies brought their own food so they didn't have to overpay for lousy Disney World junk.

Naturally, after much creepypasta including a video of panicky earlier explorers with bonus Blair Witch shaky cam, one of the scientists cracks up. Most of the audience has by this time, too. Anyway, Padmé is left alone, when she finally reaches the park theme building, a lighthouse. There she discovers:

After tiring of playing a Groucho and Harpo mirror game with Stacy (or an alien (Andy Serkis)), Padmé blows up the lighthouse and The Shimmer disintegrates. Yeah, all that buildup and it's kaboomy time. She returns to her husband (Oscar the Grouch) with enough foreshadowing to threaten that a sequel is in the making.