WackyNews:Donald Trump to run as a Democrat

From Wackypedia
(Redirected from Illoginews:Donald Trump to run as a Democrat)
Jump to: navigation, search 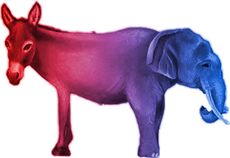 Proposed mascot for the Republicrats

The rumors have been confirmed. In 2020 Donald Trump plans to run as the Democratic candidate for President.

"It's only logical", as Sandy Sandersen, Trump's latest press secretary, explained to the remaining newspaper reporter who still attends her briefings. "The 'Trump 4-Eva' voters will vote for Donald no matter what ticket he runs on, and the "Vote Blue Every Two!" voters will vote for any Democrat at all, so conservative estimates indicate he should take at least 85% of the vote in the national election. That's enough to win him a second term, and simultaneously ratify a new Amendment to the Constitution so he can get a third term at the same time. It's brilliant -- but we would expect no less from Our Leader."