WackyNews:Cthulhu caught off the Miami coast

From Wackypedia
(Redirected from Illoginews:Cthulhu caught off the Miami coast)
Jump to: navigation, search 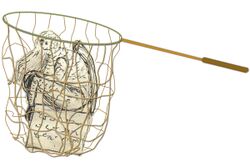 Catch of the day -- Cthulhu!

In what could surely be the biggest fish story ever, a shrimp boat out of Key West which was trawling off the Miami coast hauled up Cthulhu, who was apparently dreaming and not paying attention to where it was going. The surprised fishermen immediately notified the Coast Guard, just as they would for anything weird that seemed to be trying to slip in from Cuba.

The Coast Guard was out of its depth, however. Cthulhu is not a U.S. citizen and hence would be classed as an illegal immigrant. Consequently, the Coast Guard summoned ICE to take care of the problem.

And then it woke up[edit]

ICE agents, ever intrepid, are willing to tackle any problem involving the border. But dealing with Cthulhu is a little above the pay grade of most field agents. Consequently when Cthulhu woke up during a routine strip search, they were not adequately prepared to deal with it.

Some witnesses estimated that Cthulhu was tasered a total of 35 times during the ensuing struggle. However, it didn't kill it, and in fact it only seemed to make it stronger.

At the end of the day, Cthulhu ate the crews of the fishing boat, the Coast Guard cutter, and the ICE launch, along with the three boats involved. With no witnesses left behind, it then headed back into the depths of the Cuba sound.

A spokesman for ICE said they rarely have to deal with problems of this magnitude, but if it wakes up again in the future, they will do whatever is necessary.