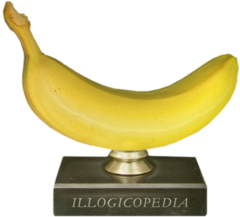 The winner will be awarded an amusingly shaped trophy.
Shortcut:
zap/IOTM

Until the 30th of Novelniver, users may vote and/or nominate a user which they feel has made significant contributions to the wiki this month. Contrary to popular belief, a single user can win the award more than once. In other words, who has made you laugh the most in the last few weeks? Who has impressed you most with their wiki coding? Who has been most proficient in reverting vandalism?

Oh yeah, and don't vote for someone just because they're your mate or something. They have to, you know, deserve a Golden Banana. From doing good stuff.

Well, last month's vote was one of the closest in a while, and we ask those who didn't win to console themselves in the fact that there is always this month. But, congratulations to our latest winner of the Illogicopedian of the Month award, Ragglefraggleking, who receives the rather amusingly (and tastily) shaped trophy to display on their userpage forever!

As well as being named the Illogicopedia Writer of the Month, winners will receive:

Nom'd by Some WHAT!? number two