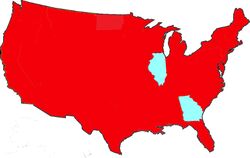 The Territory of Illogia is shown in red.

“You're really behind the times.”

Illogia is the US border territory between Illinois and Georgia.

This was considered "wild" territory, dangerous to travelers. Anyone leaving a horse to graze in a field would return to find it covered in bananas. Any traveler asking directions of a resident would just get a long string of repetitive gibberish. Female residents would all be named Phyllis, Kate or Tamia. The towns would have names like Penis and LOL. Travelers would also find direction signs frequently changed, a game called "redirection", so that they would end up going in circles. Any letter sent from the area would arrive with additional scribbling and bizarre comments.

The US Seventh Cavalry was sent in to clear out the worst scoundrels, but ended up in the Dakotas due to the signage and were wiped out for trespassing. Thus, Illogia still remains a hairy mole on the butt of America.