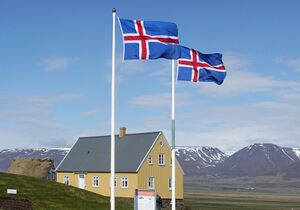 Two flags are always flown in case one blows away. Note that one is flown upside down here.

The Icelandic flag is the earliest and longest-lasting national flag in the world.

The design is a combination of the red and white English flag and the blue and white Scottish flag, much like the British Union Jack today. This is because rival groups of Vikings from the Luton area and weegies (from Glasgow) arrived on Iceland at the same time. With both flag bearers locked in battle during a blinding rainstorm, the colors from each flag ran together, producing something like the flag we see today and confusing everyone on the field of battle. Eventually, the two groups made peace and adopted the new combined flag. This was commissioned to Betsy Rossdóttir, and the new flag was first flown in the year 972. This first flag was blown away by strong winds since no trees were available for flagpoles and since the flag was normally held by small children taking turns daily.