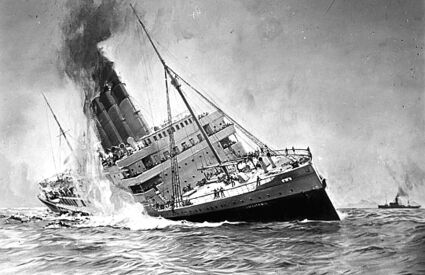 Luuuu-cyyyy!!! You got some 'splaining to do!!!

I Love Lusitania was a long-running comedy series on American television.

Set aboard the cruise ship RMS Lusitania, the storyline revolves around the wacky goings-on aboard ship, revolving around the scatterbrained cruise director, Lucy (Helena Bonham Carter). Most of the episodes revolve around Lucy trying to join husband and bandleader Ricky Ricardo's (Juan Peron) orchestra in order to qualify for the stoker gang that Ricky also runs. Shipowners Fred (Aristotle Onassis) and Ethel (Maria Ouspenskaya) are always aboard when hijinks ensue, continually getting involved in Lucy's harebrained plots like the assassination of Archduke Ferdinand (Gerald Ford). Captain Steubing (Francesco Schettino) meanwhile hilariously attempts to keep order from his hotel room on shore, to no avail.

The key and last episode is everyone's favorite. In it, Lucy convinces the captain to follow a straight course instead of a zigzag one to avoid enemy submarines. This is so she will be in time to attend a personal appearance by Cesar Romero (himself). She goes below decks to tell Ricky, supervising the stokers, that she will be away for a while. Instead of taking a lamp, she accidentally lights a stick of dynamite, mistaking it for a candle. The ship is blown to kingdom come, bringing gales of laughter from the laugh track. In the board of enquiry held afterwards, the British Admiralty decides to blame the explosion on the Bossa Nova Rio a German torpedo (Werner Klemperer), thus bringing the United States into World War I.