I Can't Believe It's Not Buffalo! 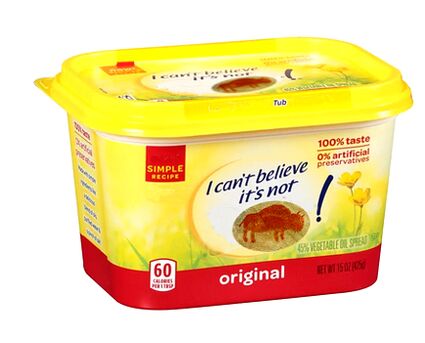 I Can't Believe It's Not Buffalo!™ was a product developed by the Plains Indians in the late 1800s.

With the huge decline in numbers of bison/buffalo/buffalos at the time, shamans and Indian scientists wearing white coats as proof of their science-y nature decided to combine their efforts to create a substitute. However, many chiefs pointed out that all the fake treaties as written indicated that Indians could live on the land "as long as the buffalo roam the plains and as long as the rivers run." Those leaders were well aware of the efforts by 'Mercans to dam up all the creeks and rivers with the millions of buffalo carcasses they had shot. Since no bad idea was ever rejected by humans of any kind, rather than starting a bison/buffalo/buffalos breeding program and melting a bunch of glaciers, all attention was placed on finding a bison/buffalo/buffalos substitute.

Initially, gluing together large bunches of prairie dogs was tried. But test subjects complained about too many bones and the small size of the drumsticks. Expeditions were sent to Asia and Africa to bring back elephants, but these attempts failed since the loaded ships all sank for some reason. At this point, researchers were totally frustrated and decided to take a break.

This led to a group of scientists and shamans to attend a circus. Since the tents were waterproofed with paraffin as usual, they were extremely flammable and the circus was able to maintain its tradition of panicked crowds fleeing a burning tent that day. The Indians narrowly missed a head-on crash of the peanut and popcorn wagons with a resultant explosion and fiery ball of flame. The shamans and scientists were covered in a mix of both snacks. Tasting it, they liked it and thought it tasted very close to roasted bison/buffalo/buffalos. They returned home with this knowledge, ordering hundreds of peanut and popcorn wagons. Soon, Indians were busy crashing them into each other all over the Plains region. This new product was branded as I Can't Believe It's Not Buffalo!™.

However, word of this product reached the headquarters of Kraft Foods, controlled by the Annunaki and the Illuminati. Their lawyers blocked the sale of I Can't Believe It's Not Buffalo!™ as they contended it encroached on their existing I Can't Believe It's Not Butt! The Plains Indians lost the lawsuit because, after all, they were Indians, and were forced to move to reservations to live on Spam.