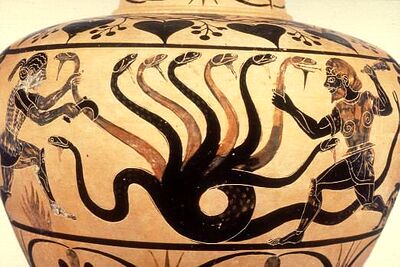 The Hydra of Lernaea was a huge many-headed snake of ancient times. The exact number of heads is still unknown, since nobody could ever get close enough to get a good count. In fact, it grew two heads back if one was lost, making things even more complicated for OCD-types and ancient Greek accountants who demanded an exact number.

The Hydra was the scourge of the 7-11s of the land of Lernaea, leaving scrolls askew and on the floor around the magazine racks and leaving the self-service food area a total mess. It also had poisonous breath from living off a diet of fast food, not to mention deadly farts. Thus, Heracles, the Chuck Norris of his time, was given the task of killing this monster by the 7-11 home office.

Heracles was smart enough to bring along his nephew Iolaus for the battle. The latter was to sneak up behind Hydra and tickle various parts of its body. When one head reacted to the tickling and was distracted, Heracles would focus on that head and strike it with his sword or club. Despite working quickly, it was only 3,458 heads later that Hydra's head regrowth slowed down enough for Heracles to take the entire body and burn it. However, the panel of judges determined that Heracles cheated by bringing along an assistant and he was penalized by being given two more impossible tasks to perform. How symbolic.

For those without comedic tastes, the so-called experts at Wikipedia think they have an article about that snakey thing with a lot of heads, or simply go here.

This demonstrated the difference between a hard-headed unimaginative heroic type like Heracles and a devious schemer type like Loki. Loki would have chopped off the Hydra's tail which would have bled out and killed the monster. Or he would have started an argument among the heads about religion or something, and the heads would have gotten into a fight and killed each other. Easy peasy.