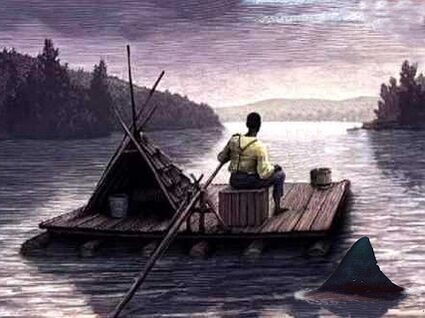 Huck and Jim, up the creek without a paddle.

Huckleberry Fin was Tom Sawyer's best friend. At any rate, as good a friend as a shark could be to a human.

As a youngster, Huckleberry had escaped a horrible life in New Zealand where he was outshone by older brothers Tim and Neil, who gained success in the band Split Enz and later, Crowded House. During any feeding frenzy, it was those two who got the most whereas Huckleberry only got scraps.

He wandered the world's oceans for a time, then somehow ended up along the Mississippi River in Hannibal, Missouri. There he lived the life of a feral animal which, truth be told, he actually already was. Huck, as he would come to be nicknamed, would steal fish off lines and snap up the occasional human swimmer. It was in the latter behavioral mode that he first encountered Tom Sawyer. Young Tom was swimming and was swallowed whole by Huck, but farted and was spit out. After a heated argument that devolved into a laugh-filled fart fest, the two became BFFs.

Having become an avowed anarchist, Huckleberry decided to free the slaves, helping his other friend N-Word Jim escape slavery by going north. A raft was built and they were on their way. However, being a shark, Huck was lousy at directions and the two ended up drifting south instead. Allegorical symbolism of the river, religious prerogatives, the definition of freedom based on race, blah blah blah. The two eventually drifted into the Caribbean. There, N-Word Jim was rescued but mistaken for a boat person and deported to Cuba.

Upon Huck's return to Hannibal, he and Tom were arrested as witches and sentenced to be burned at the stake. In reality, the townspeople just wanted to rid themselves of a couple of troublemakers that were altogether too happy and disrupting their delusional privileged redneck lifestyle of Wal-Marts and inbreeding. And so, Huck and Tom were burnt to a crisp and Missouri became the safe haven for hillbillies and Kansas City barbecue that it is today.