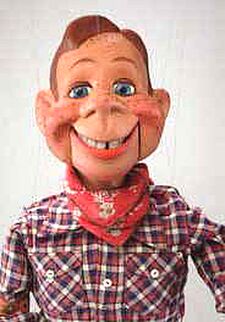 As a visitor to America will quickly discover, the standard greeting in the country is, 'Howdy do!'

Like America itself, Howdy do is a phrase with origins from different places in the world, combined into one. The first word is an extreme shortening of the common Scottish greeting 'How d'ya resolve the mysticism of John Donne wi' the existence of ancient Druidic practices say'n that it was all a load of shite?' In Scotland, a wrong answer would get you a dagger in the hooha. However, in the United States, its true meaning has been lost to the mists of time and inbreeding amongst it inhabitants.

The second word do naturally is an American word for shit. sometimes called doody or caca-doody or crap, Americans have adopted the word to be incorporated in every facet of life. They are totally obsessed with shit, never failing to use the word in any five-minute period. 'Where's my shit?', 'You're fulla shit!', 'Shit! Shit! Shit!' are just some of the colorful phrases heard in the streets and in the home. So do not be shocked, even when the long greeting form is used, which is 'Howdy doody!'

So when an American approaches you and greets you with a hearty 'Howdy do!' you will now be aware of their greeting and will act appropriately. And that is to slowly reach into your pocket and hand over your wallet, or place your purse on the ground in front of the American, if you know what's good for you.