Rock Paper Scissors, or RPS among certain cahoots, is a game of skill, proprietry, and deviatian. It's not what you know, it's who you know. For example you may know what the other player is going to use next, but say he knows a wealthy industrialist, then he sues and you lose.

A brief look at the history of RPS[edit] 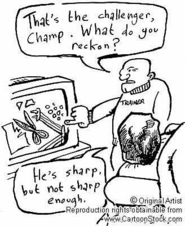 The "game" was invented by the ancient Mian's as response to those who needed a new method of settling arguments amongst themselves. (The previous method of determining debates had involved one party smashing an axe into the face of the opposition, which though direct and straightforward, proved detrimental to the Mian's population.) Upon their search for a new procedure the Tribe Elder noticed how wrestler-turned-actor "The Rock" impressively dealt with wave after wave of pesky scissor attacks. As he sat there in thought, wondering how he could incorporate such an example of nature's geinus a paper sheet was blown by the wind into the WWE star's face, leaving him with deep papercut's and smothering him to death. The scissors then sliced the paper open to see if they were better than the Rock's defeater. Eureka! In that insanely cool moment where office equipment and mogul combined forces the solution was found. Rock. Paper. Scissors.

Partakers would choose either the option of a handsignal represnting rock, paper, or scissors. After the iniator had counted up to three the parties involved would reveal their handsignal: 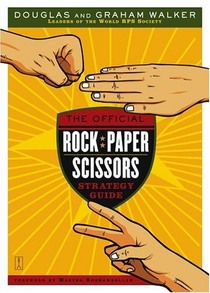 The demand for RPS has spawned numerous strategy guides, including this one.

Rock Beats Scissors. This is because of the great war between two warring factions in Mian politics. To resolve the issue, they entered into battle against each other; one side charged brandishing rocks, the other ran towards them with scissors. Needless to say those using scissors were immediately arrested and sentenced to a spanking for breaking the fundamental safety principle of the age: "Don't run with scissors". Ever since then it's been widely acknowledged that rock is superior to scissors.

Scissors Beats Paper. Though paper often conceals a sharp edge that can cause considerable gonaddical pain when applied to one's genitals in a quick slashing motion, it is not specifically designed to cut objects. Scissors on the other hand were formed in the fiery pits of Mordor for that very purpose. Some safety variants are designed to lessen their cutting potential due to law-suits from careless men who've utilised them in attempts to remove unwanted crotch hair. Owing to the fact that scissors often prey upon paper in the wild, the game ruled that Scissors beats paper.

Paper Beats Rock. Rocks breathe through their skin, so therefore rocks are instantly killed by paper, which smothers them. My friend told me, and he almost passed science at college - so it's practically scientific proof. I saw a science once.

After the winner has been determined the losers must submit to their whims, a fate worse than deaf(ness). RPS is used each day worldwide to settle philosophical debates, determine the next leader of a country and in some cases promote violence against particular items of stationary or geology. A woldwide betting industry has cropped up on the back of the game, riding off the versatility of the sport, and promoting such famous RPS player's quotes, like "Best o' Three?"

There are some 'bonus' moves you may do in Rock Paper Scissors, such as Bum, McDonald's and Pokémon.

RPS has numerous cheat codes. But many official RPS referees do not allow these. We don't care. Here's a list of them.

ROCK ROCK ROCK PAPER SCISSORS opens the portal to the next level, allowing you to skip opponents if they are too hard to beat.

If you are terrible at using cheat codes, or you just won't play fair, you can downright cheat, at the cost of your RPS reputation, and all the cheese in your fridge.

To downright cheat, punch the opponent in the face, and force them to use a losing handsign. Then, claim you win and take the prize. If the referee tries to stop you, punch him as well. In fact, punch everyone. Punching is fun. After you have KO'd everyone in the arena, take your prize and RUN FOR IT! You have just cheated your way into a RPS trophy.