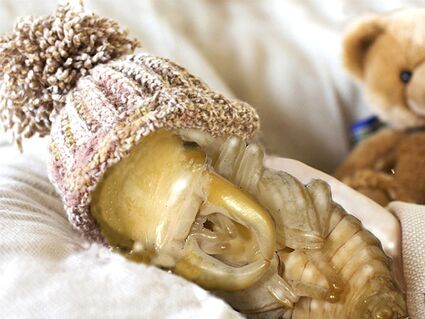 It is imperative to be able to detect the difference between a real baby like this and a changeling.

Have you looked in on your sleeping baby and wondered why it didn't really look like you? Have you ever walked in to the baby's room and found demons surrounding the crib and paying it homage? Has the Winnie the Pooh mobile above your baby's crib been mysteriously replaced by dismembered body parts hanging by intestines? Then you just might have a changeling on your hands.

Fairies, elves, pixies and magic supermarket checkers can swap something supernatural disguised as human babies. Some sources think they take them because the human baby is beautiful and can be entered into toddler beauty pageants in a few short years. Others think they kidnap babies so they can raise the latter as their own and have something to shame, nag and bully while the supernaturals become old and cranky. Fairies get the replacements from the babies of demons, themselves replaced by groundhogs or elaborate origami animals.

Look for these additional telltale signs:

Of course, all these signs don't mean anything if you are a demon yourself. In rare cases, your baby will be swapped with a lemon meringue pie. In which case, just eat the pie before it goes bad.

If your supposed baby is a changeling, you can try the following: