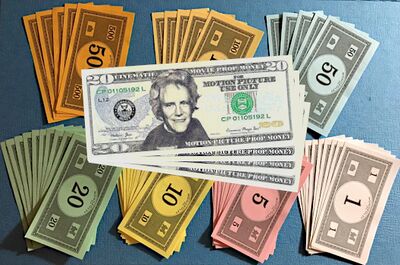 Up until fairly recently, these easy-to-print fakes, along with bottle caps with numbers written on them, were accepted as legal tender in Texas, Alabama and Florida.

We all know how tough things are nowadays. We could all use a little more money, that's for sure. Well, actually, a lot more money. Maybe more like a shit ton of cash, amirite?

Since working for that is completely out of the question (because laziness) there just has to be a way to keep those Amazon packages flowing to your door. We have the answer. And the answer is (Dun Dun DUN!) counterfeiting money! Sure, it's illegal as hell, but the 50 or so million that you are going to make won't affect the economy very much. And you must promise your pets a cut of the profits, otherwise they'll turn you in for sure.

There are governments out there printing up US bills/banknotes with the latest hi-tech equipment that are really hard to distinguish from genuine ones. You can stand outside the printing plants and wait for a few bills to flutter out from an open door, but that's not going to get you the millions you need and deserve.

Now, this is the US version, but the rules can be easily adapted to your country, even though nobody trusts anything except dollars nowadays. And those are going to be fake more often than not. Hint: Ronald McDonald is NOT on the $100 bill.

Don't forget you need to do a front and back, just in case. Don't be tempted to put a picture of your house on the back. Just sayin'. Then you can use a color copier to make more. Just don't tell the clerk/goldfish at the copy place that you'll pay AFTER you use their machine.