HowTo:Attend the circus for the first time 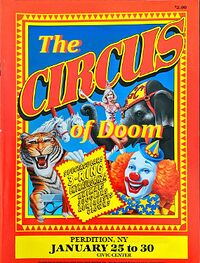 So you've just been told you're going to the circus for the first time. WOW!

Probably your first reaction is to run away from home. Because clowns. But you should be aware that clowns are everywhere in the world, even in the ocean or even your bathtub. And they're often in disguise so that they can do a jump scare and make you piss your pants. So you'll be just avoiding the inevitable. After all, there are storm drains at every street corner for Pennywise to talk to you, which is why your parents drive you everywhere when you're not chained to the floor in your closet.

You won't be told the day you're going to the circus. But you will know it when you peek out of the trunk of the family car and see an arena or coliseum outside. Your parents will be acting all happy and excited, but just go along and pretend to be 6 years old like they tell the ticket taker. After a really long climb, you will reach your seats up near the rafters. By the way, that's not fog around you but clouds forming under the roof surrounding the nosebleed section.

You'll hear music start up. Your parents will excitedly point out the line of tiny dots below and tell you it's the circus parade. Okay, just play along, and maybe from all the popcorn, peanuts, ice cream and hot dogs they bought, they just might let you have what they drop. You'll see all kinds of dots in the air, on platforms and on the ground. That's the circus! Some of those dots are clowns. Not so scary now, eh? Except for the one sneaking up behind you with an axe.

Now the show's over and you must be very tired. But that's not all. Your parents will offer to show you everything backstage. Sounds great, right? But they're just taking you to the office where you will be sold to the circus, either as a drudge collecting elephant poo or dressed as a geek for the sideshow. Hope you brought your leg chain with you.