Non-fiction time, kiddies! Put on your Magic Beards and follow along!

The House of David is/was a religious commune, just another bunch of end-of-the-world cultists, you'd think. Founded in 1903 by Benjamin and Mary Purnell, they settled in Michigan, recruiting like-minded members.

Like any cult, they had a bunch of rules for its members:

Now with the end coming any minute, you'd think they'd be sitting around praying 24/7 or something. Nope. For a group that may have had around thousand members or so at their peak, they were the hardest working people imaginable. Today's Korean immigrants have nothing on these guys. And that was not about building doomsday devices or anything good like that. To make up for all the "no"s and to make money to support themselves, they had: 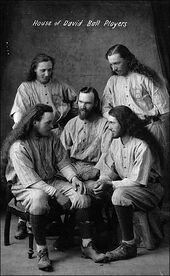 Rivendell elves prepare to take on the orcs in a twi-night doubleheader.

The House of David baseball team was and is still famous, barnstorming across the country like the bands. They even hired ringers who either grew a beard or wore fake ones to match. So you think all those beardy baseball players of today are unusual? House of David was included in the Negro League as they were excluded by major league teams. The beard/hair thing, again. So, back in the day, you could see Saruman and Gandalf lookalikes playing locally.

With the amusement park, bands and sports teams, the House of David was a visible, well-known and pretty popular bunch. They may have worn their religion on their sleeves (or chins) but there are no accounts of scary heavy-handed evangelizing like cults do today, with someone standing on your chest, screaming at you while trying to stuff tracts down your throat. For a doomsday cult, they were a pretty sunny bunch. Weirdo Japanese cults, pay attention here! Yet the city they were in, Benton Harbor, refused to hire members because of beardophobia. The House of David eventually bought controlling interest in its streetcar system and had members working for it.

Asterisk (*) time. Founder Benjamin Purnell was accused of molesting girls in the commune. This was perhaps an attempt to shut down the group and seize their cash. Sound familiar? The founder died before he could be tried. But with him gone, there was a power struggle and a split. Sound familiar? Mary Purnell then took her supporters and moved all the way down the road and set up a new colony. What? No tortured voyage across oceans and deserts? No ninja assassinations? No mysterious explosions? Were these people even human?

Today, the branches still exist with a couple of members each, enough for a game of hopscotch, maybe. This was the intent of Mary Purnell, actually, to just fade away and the assets would go to Michigan by law. But the groups have lots of money, so perhaps now is the time for ninja assassinations and explosions.

For those without comedic tastes, the so-called experts at Wikipedia have an article about House of David, or simply go here.
Retrieved from "https://wackypedia.risteq.net/w/index.php?title=House_of_David&oldid=131686"
Categories: