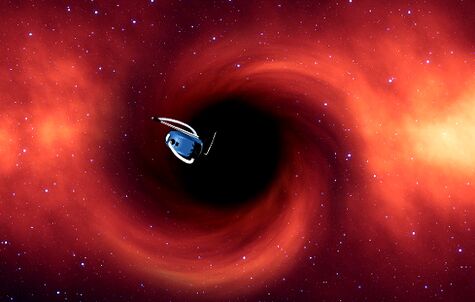 Oh dear, someone's hoover is being sucked into a black hole. A bit ironic though, don't you think?

A hoover (American: vacuum cleaner) is a mad device for sucking up dust and dirt and distributing it more finely thoughout the home.

So you Americans will inevitably ask: which came first, the chicken or the hoover? We do know that long ago, cavemen everywhere admired the way that elephants could inhale water or dirt through their trunks and spray it on themselves. Or on cavemen. The latter had a devil of a time getting elephants into their caves much less getting them to suck up anything but food. Humans eventually gave up the quest for clean homes for thousands of years. Then they began carving homes out of solid rock, leading to the drafty stone castle as the means to keep floors neat.

It was not until the invention of the broom by witches that floors could be kept tidy on a regular basis. Of course, this just meant the carpeting made of straw and rushes just went out the door and had to be replaced. By the 20th century, primitive hoovers had been invented, mere glorified bicycle pumps whose users always provided laughs for the witches in the neighbourhood. But electricity changed all that, allowing people to have a clean home whilst accidentally burning it down in the process.

Once again, Americans got things turned the wrong way round in regards to the UK. These machines were indeed originally called vacuum cleaners in the country. But the US President Herbert Hoover came over during the Great Depression to sell the machines via doorstop selling to bail out the American economy. Despite his weird accent, he is remembered as a very charming man and sold a good number of machines on hire purchase (American: installment plan). Thus we have "hoover" as its popular name today, and the reason why every British home today has a CCTV camera and a chain guard on its front door.

Mistaken ideas about this modern household miracle continue to today. Whilst the Maharishi Mahesh Yogi was visiting the Beatles, American reporters attempting to interview him were told he was 'busy hoovering'. This was totally misunderstood to mean that the Maharishi was floating in the air or somesuch. Americans are still trying to fly by themselves today, whereas airlines can do the job perfectly well. Another myth is that cats hate hoovers. British cats have taken to riding Roombas everywhere these days, even patrolling their streets for signs of the Cat Bin Lady.