This is a story about a typical "home". 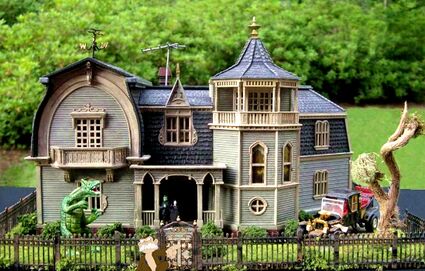 While I was cleaning my teeth I felt very strange like something bad has happened. I tried to figure it out but I only started to feel very tired, so I went to bed. When I was lying in my bed I still felt very strange. This unexplainable feeling was very annoying so I took an aspirin.

When I was slowly starting to fall asleep suddenly I heard a brutal grunting from the kitchen. I got really scared because I was the only one living in this mansion, so I took my sawed-off shotgun and cautiously sneaked out from my big and dark room. When I was in the corridor outside the kitchen I noticed that I had no ammunition in my homemade sawed-off shotgun so I hoped that there was no obviously danger in my handmade Korean kitchen. I slowly peeked in and saw this huge and extreme gory flesh pile. Then I remembered that I had some butcher work to put in before sleeping time, but what was that grunting sound coming from I asked myself. It must have been from my twisted imagination I thought and started to walk to the fridge to get some milk.

The cupboard had been badly damaged from my crazy hobbies. Why do I have to throw knifes at my freaking cupboard I thought. I took one of those nice cups I had. The cup was red with a big strange occult symbol on it. I poured the milk in my red cup and moved the cup towards my mouth when suddenly, GRUUNTHHH…. I dropped my nice red cup on the granite floor and all my fresh and tasty milk was ruined. My feet got wet when I turned around to see what terrible thing that could possible make such a noise. To my big surprise it was not a “thing”, it was my personal Santa who I owned. What are you doing here? I screamed in rage. Grunt, grunt, grunt and ho, my personal Santa said. And what do you want to say with that I said even more pissed than I was first. Do you think you only can come here when you want? I asked Santa. Grunt he coughed and said that he only wanted to borrow some nice, fresh and delicious milk. Ok I said because I knew that my personal Santa never tells me anything about what he is going to do. But now you have scared me so I dropped the cup, I almost wept to him because my milk is one of a kind and absolutely very rare. That’s ok I can take the milk package instead, he said. So my personal Santa took my milk package and went out to the cold winter darkness. He never came back again and I don’t miss him because I didn’t like him at all.