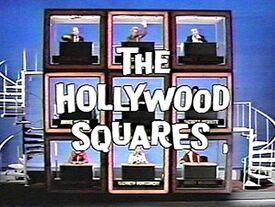 Hollywood Squares was an American television game show where contestants would play a version of tic tac toe with ancient washed-up actors and forgotten former celebrities in squares in a giant tic tac toe board that trapped them so that they were forced to play the game without bathroom breaks. Occasionally, someone in their 15 minutes of fame like Monti Rock III would make an appearance, since the studio was located in Hollywood and these minor stars could be kidnapped off the street and no one would miss them.

Each has-been or wannabe actor/celebrity would be manipulated by two puppeteers, leading to Jim Henson using the same concept for his Muppets. The only exception was Paul Lynde, who would be given loads of caffeine and would then provide a never-ending stream of sarcasm and off-the-cuff remarks even after the studio was shut down and the lights turned off.

Home versions of the game were sold with prunes with stick-on faces replacing the actors/celebrities. Few intact games exist today due to mold growth and the inability of humans to play tic tac toe anymore.